Learning to use your pet’s symptoms* as valuable clues for understanding underlying imbalances and addressing them holistically is one of the most important things you can do.

Though your pet’s symptoms can quite naturally cause you concern, they can help you crack the case by guiding you toward holistic actions that don’t just cover up or quiet down symptoms but promote optimal health.

*In this article, what we will be referring to as “symptoms” are understood medically as “signs.” To learn more about this distinction, read this article.

When Looking for Clues, Don’t Confuse “Common” With “Normal”

Just because it’s common, it does not mean that it’s normal.

In order to maintain and promote optimal health for our pets, it’s super important to understand the difference between common and normal. Just because it’s common, for example, to see certain breeds of dogs with excessively runny eyes, or cats that are a bit overweight, this does not mean that this is normal. (And by normal, what we mean is indicative of optimal health.)

This idea applies as much to people as to animals. Sure, it’s incredibly common for people to lack energy, to suffer from allergies, and to have trouble sleeping, but this doesn’t mean it’s normal. (Indicative of optimal health.) In fact, it’s the exact opposite.

When an animal’s or human’s body is in a state of optimal health, all systems are in balance. For this reason, no external manifestations (symptoms) of imbalance or dis-ease can be found. Symptoms are basically warning signs from a living system that is saying, “Hey! Pay attention! Something’s not right, and I’m trying to give you clues about what the trouble is and how to help!” 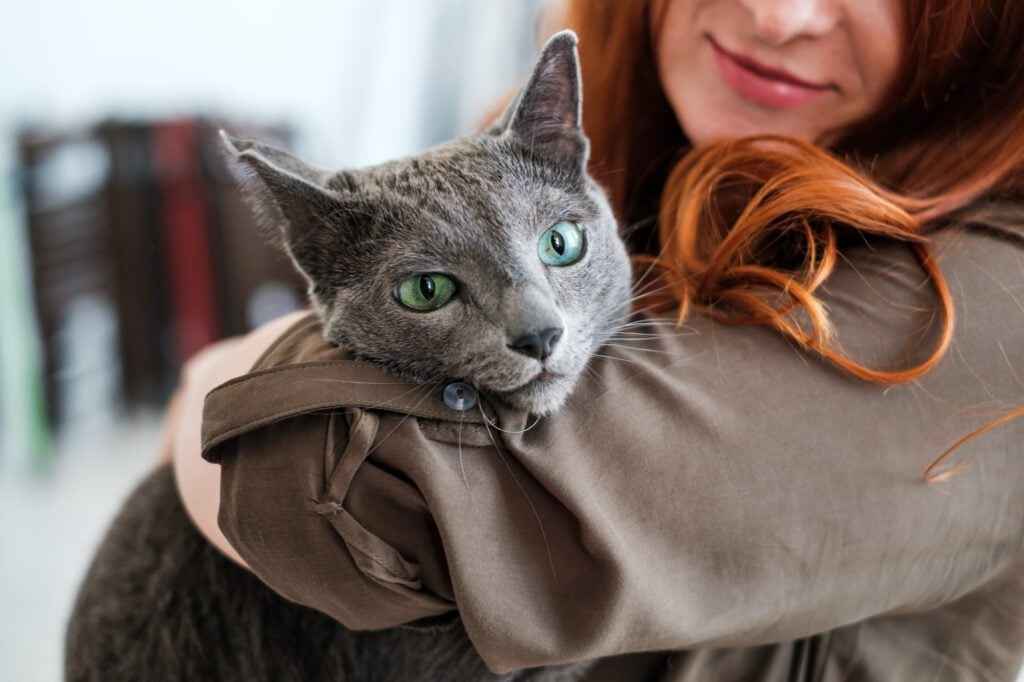 It’s extremely important to pay attention to and track changes in your pet’s BEAM (Behavior, Energy, Appetite, and Mood). Even subtle changes that may seem like “no big deal” can be a clue that pet’s system is losing its equilibrium.

Recognizing and taking holistic action to address these incredibly common yet completely abnormal early warning signs is critical to your pet’s quality of life and long-term health.

Look for these common clues:

If you’re like most pet lovers, when you read down this list, you may be feeling something like, “Oh my gosh, my dog or cat shows one or more of these signs, but I thought it was perfectly normal and never thought much of it!”

We may succeed in silencing the smoke detector (suppressing symptoms), but that doesn’t mean the fire is out.

It really is a bit shocking when you begin to realize that almost all of the symptoms we take for granted as “normal” in animals and people alike are nothing of the sort. It’s a sad state of affairs when you realize that imbalance has become so normalized that we either don’t register it (since it’s the water we’re swimming in), or even mistake it for health!

When our or our pet’s symptoms start sending out warning signs and setting off alarms to get our attention, we behave like people in a burning house who are preoccupied with silencing the smoke detector rather than putting out the fire. We may succeed in silencing the smoke detector (suppressing symptoms), but that doesn’t mean the fire is out. In fact, when we behave this way, it’s more likely than ever that, given enough time, it will burn the entire house down.

Health is Freedom From Dis-ease

Optimal health is a natural state of balance where we and our companion animals find freedom from dis-ease.

Balance, of course, doesn’t mean that all forms of dis-ease can be entirely eliminated. All living things must contend with some degree of difficulty, discomfort, and eventually, death. But balance does mean that we and our pets can become free of the dis-ease that comes from not listening to the intelligence and wisdom of the body and its miraculous way of providing us clues that let us know it needs our help.

You can see this freedom in your dog’s lustrous coat or in your cat’s bright eyes. You can feel this freedom in their high energy and eagerness to run and play. Balance, which is the true meaning of optimal health, means freedom from medications and “allergens.” It means reductions in problems commonly associated with particular breeds and healthier offspring. And maybe the best part of all? Balance means enhanced life expectancy, which means the likelihood of you having many happy years with your pet. 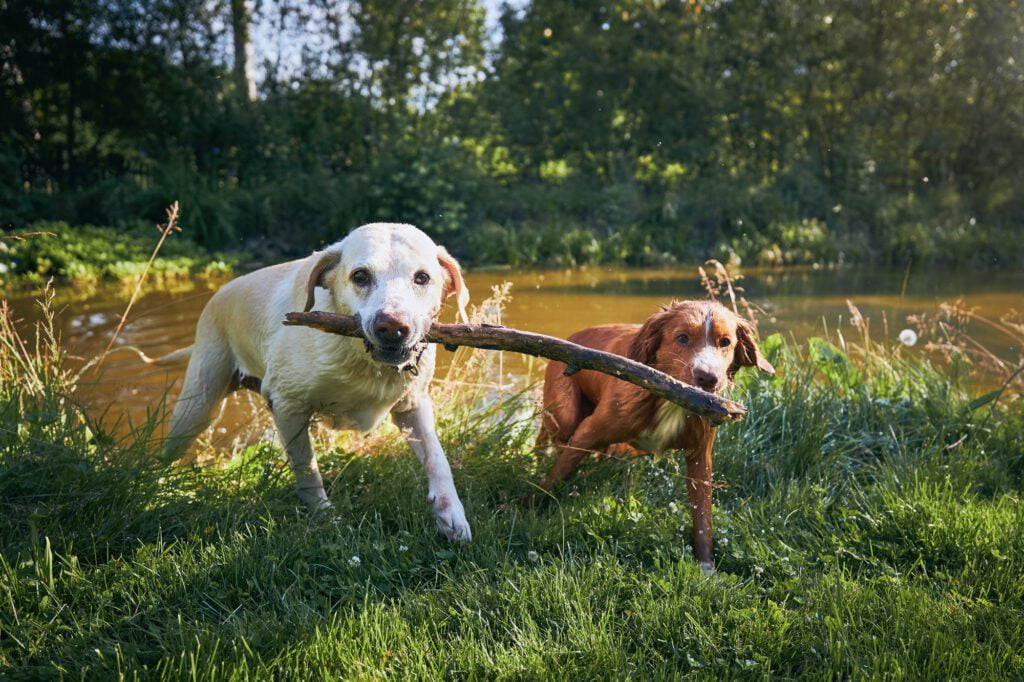 There are literally hundreds of symptoms that may signal an underlying imbalance and loss of vital energy related to not knowing the right foods to feed your pet or the impacts of vaccination. Below you will find many specific clues that you can use for solving the case, taking effective holistic action, and promoting optimal health.

Don’t consider the case closed until you’ve cracked these clues. In other words, continue to work toward restoring inner balance and vitality until there are no more clues (symptoms) to be followed. You’ll know you’ve solved the case and nurtured optimal health when your dog or cat is symptom-free! (Or very close to symptom-free since in some cases, symptoms cannot be completely resolved, though can almost always be dramatically improved.)

Digestive Tract Clues: obesity or thinness; loss of teeth; bad breath; pale gums; red gums; *a red line where the teeth go into the gum, above one or more teeth; tarter accumulation; bad breath; poor appetite; excessive appetite; finicky appetite; sensitivity to milk, meat, or any specific food; craving weird things, especially non-food items like paper, dirt and plastic; vomiting often, vomiting hairballs  (or the hairball gagging type of vomit even if hairballs do not come up) more than 1-2x/year; Mucous on stools, even occasional; tendency to diarrhea with least change of diet; constipation; hard, dry stools.  In Addition for cats: thirst – a super healthy cat on good food will drink at most once a week and many will never drink as they absorb enough from their diet unless on dry food.

Movement Clues:  Stiff when getting up; early hip dysplasia; inability to jump up on furniture or counters; loss in the bounce in their step.

Aging Clues: Energy and activity levels and eagerness for play should remain fairly constant after two years of age and only significantly decrease with advanced age.

Keeping a journal is critical to track your pet’s symptoms – that will help determine the severity of symptoms and imbalance, what treatments are helping problems to become less frequent and less severe, and help your holistic veterinarian choose the best treatment options.

You can create your own journal using a three-ring binder, a notebook, a day-planner, or even a regular calendar with large blocks for recording observations. Premium and All Access members can download Dr. Chambreau’s Journals for free. If becoming a member is not an option for you right now, you can purchase the journals here. 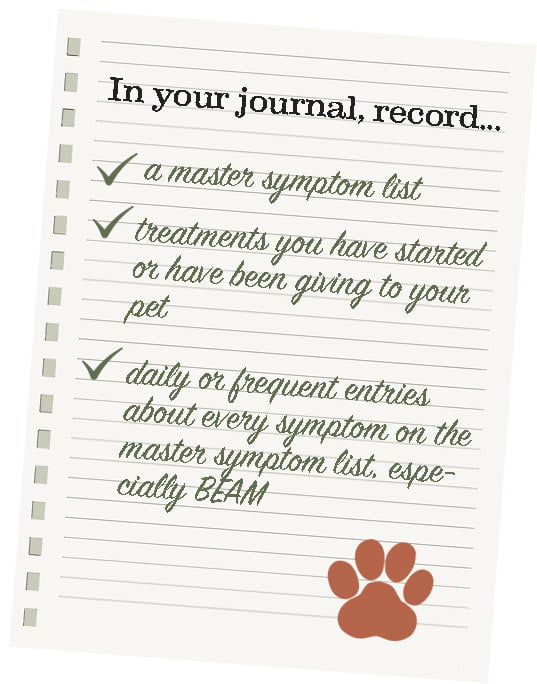 Holistic Actions! is here to help you crack the case of your pet’s symptoms and use them as trustable guides for nurturing the inner balance and vitality that every dog and cat deserves!

Thank you for visiting us here at Holistic Actions! We wish you the best of luck on your holistic pet care journey!