Why Fish is Dangerous for Cats

A lot of cats have learned to love fish, but it’s not a natural feline food; and it’s really not a good idea to feed it to your cat. Why not? Because it is simply not safe to feed fish to cats (and humans should be very careful about eating it themselves, and especially about feeding it to their children!). Here’s why:

Most fish used in canned pet foods comes from the decaying leftovers of the seafood industry around the world. It is a mishmash that’s high in phosphorus and magnesium, which can be a serious problem in cats with a history of urinary tract disorders or kidney disease. In practice, I have seen many cats develop urinary tract infections and blockages if they eat fish—even canned tuna. After I shared one meal of halibut with my three cats, within hours two of them had urinary tract flare-ups, and by 6 a.m. I had my boy kitty on the surgery table while I inserted a catheter. It’s even worse if, as is most common, the fish are simply ground up, bones and all. Excess phosphorus is dangerous for kitties with kidney disfunction; there is as much phosphorus as calcium in bones. 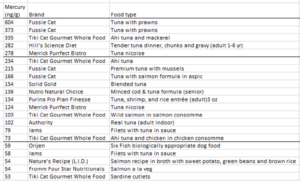 (Sorry about the image quality; we are working on getting a better one.) Watch the video here. [Note that they mention in passing that they found a food labeled “Duck” that actually contained sheep!]

A great deal of seafood sold in the US comes from Asia, and in particular, Thailand. The New York Times and U.K.’s The Guardian have both run exposés revealing the terrible human conditions—including outright slavery—involved in Thailand’s seafood industry, as well as the cheap but foul trash-fish slop that is not only used by fish and seafood farmers around the world to feed their stocks (including salmon, tilapia, trout, catfish, carp, shellfish, shrimp, and prawns, much of which is destined for US markets) but also goes directly into pet food. Thailand is a major source of fish and seafood products used in pet foods. Mars and Purina have both admitted that fish used in their pet foods may come directly from slave labor. Some brands are made right there in Thailand, then shipped to the U.S., including several popular “boutique” brands of canned cat foods. (Many thanks to Mollie Morrissette of PoisonedPets.com for her tireless reporting on this terrible trade.) A 2016 federal law bars all imports of fish produced using convict, forced or indentured labor, thereby ending an exemption in the US Tariff Act of 1930 that allowed goods made by slaves to be imported. However, it is unclear whether this law is being applied to pet food.

Fish farming, or aquaculture, is more common than most of us would imagine. More than 600 species are farmed around the world, but the more common ones are salmon, trout, catfish, tilapia, yellowtail tuna, cod, trout, halibut, squid (calamari), krill, crawfish, oysters, clams, mussels, shrimp/prawns, and scallops.

Salmon: Worst of the Worst

My grandfather was a salmon fisherman, so this delicious fish was one of my favorite meals. When I went off to college in Colorado, I remember bragging to my mom that, all of a sudden, my land-locked home state had salmon for sale at a fraction of its price in California. Now I know why: it came from a factory farm. The situation has only deteriorated since then, and it grieves me to see this amazing animal so damaged and abused.

The meat is unsafe, and the fishing/aquaculture industry is cruel and environmentally destructive—need we say more? Please, feed fish no more than once a week, and even then, only in very small amounts. Avoid farmed species (especially salmon and tilapia); herring, anchovies, and smelt are far safer.

Salmon of the West: What is the difference between wild and hatchery salmon? https://www.fws.gov/salmonofthewest/wild.htm 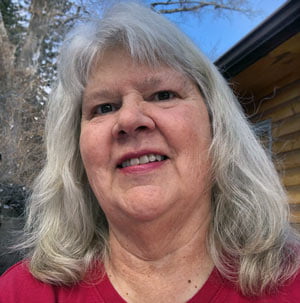 Holistic veterinarian and author Dr. Jean Hofve has more than 20 years’ experience in integrative veterinary medicine. She has a passion for feline health and nutrition, and has intensively studied and researched pet nutrition and the pet food industry since the early 1990s. She has written dozens of articles and been interviewed for print, radio, and television around the world. She is an advisor to AAFCO, the organization that sets standards for pet food production.

In 1995, she founded Spirit Essences (now owned and operated by Jackson Galaxy), which makes flower essence remedies for many animal health and behavior problems. Her first book, The Complete Guide to Holistic Cat Care: An Illustrated Handbook, co-authored with nutritionist Dr. Celeste Yarnall, won a 2010 Certificate of Excellence as well as the 2010 Muse Medallion Award for best book from the Cat Writers’ Association.

Dr. Jean is retired from veterinary practice; she is no longer providing consultations. However she is on Holistic Actions! faculty and participates in member webinars and the forum.