Size of the Medication Dose Matters. A lot! 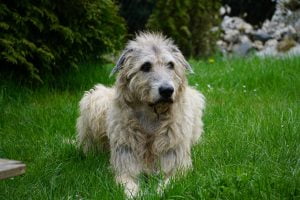 In the mid-1990s, I was called out to see Justin, an Irish Wolfhound who was unable to get up.

This was a big problem because he weighed 180 pounds.

At that time, anti-biotics were the only Lyme treatment that I knew. When Eva saw the recommended whopping dose for Justin’s size, her face flushed and she gasped.

She said the there was no way that he could tolerate such a “high” dose of medication. She thought that they definitely would make him sicker than he already was.

I prescribed the low end of the (supposedly) effective dose and left.

Eva called a few days later with an update. Justin was almost back to normal. But as she predicted, he had also developed abdominal pain, violent diarrhea and vomiting after the first high doses of drug.

She had then taken matters into her own hands and only given a fraction of the dose from then on.

After the dosage reduction Justin started walking around more normally, eating and holding it down, and his stools firmed up.

I hung up the phone and tried to understand why this happen. Weren’t anti-biotics safe? After all, they were often prescribed “just in case”.

Drug doses were supposed to be used to maintain therapeutic levels of the medications. Yet Justin responded dramatically to a much lower dose. This didn’t make sense.

The Science of Hormesis and Dose

A few years later I came across publications referring to the Arndt Schutz rule. It explains what happened with Justin and other patients who had responded to very low doses of medications.

In a nutshell, it says that low doses can stimulate the body to do its’ job, but higher therapeutic doses can be toxic.

I thought that this was interesting research, but not applicable to most patients. Boy was I wrong!

Other problems with conventional drug doses and the scientific literature on hormesis led me to researching homeopathy.

I had never heard about this area of medical science. Even after decades of scientific inquiry including working with researchers in biochemistry and molecular biology labs.

What an eye opener! I learned that the very, very low doses of homeopathic medicines were highly effective at stimulating the immune system. In fact, before anti-biotics were discovered, most of the homeopathic MDs were able to save their patients in the midst of otherwise fatal epidemics.

The survival statistics were compelling!

Many of the top, conventionally (“scientifically”)-trained, MDs flocked to homeopathy because of these successes. These men, and back then most were men, were open-minded. They saw these amazing treatment outcomes and wanted their patients to have the best.

The AMA was started soon thereafter partially to stop this migration .

Fast forward to present day. Modern medicine has made amazing strides in understanding how the physiologic process of the body function. Sometimes even at the genetic and molecular levels.

Nowadays the best medicine, both for people and pets, is always individualized. We’re learning that one size does not fit all.

Some pets can not tolerate higher doses of specific drugs like Ivermectin.

Most pets react to high doses of most drugs.

All pets die from treatment with poisons like arsenic and strychnine.

Yet these same poisons are commonly used at very low doses in homeopathy to save many lives. The tiny doses of nanotechnology are being actively researched and adopted into modern medicine

The size of the dose matters.