Does Your Dog Really Have Lyme Or Need Anti-biotics? 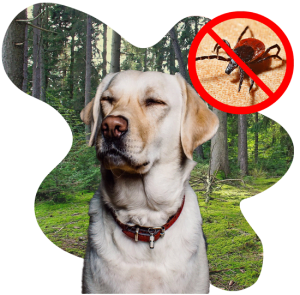 Does Your Lyme Positive Dog REALLY Need to be Treated for Lyme?

You’re probably familiar with the increase in Lyme disease and ticks. You probably also know that Lyme is a tick-borne illness.

But did you know that Lyme disease is often over diagnosed and over treated? Your pet may test positive, get treated, but not have the disease.

In this post, we’ll cover why that’s common as well as what to do and natural ways to prevent Lyme disease. Let’s first lay things out more clearly.

Why is Lyme a Disease But Not a Dis-ease?

My name is Jeff Feinman. I’m a traditionally trained holistic veterinarian who understands most health problems to actually be imbalances (or dis-eases) in the vital force. However, Lyme and other bacterial and viral diseases are different. They are not just physiologic imbalances.

Infectious diseases like Lyme, Parvo, Distemper, etc. have readily identifiable and transmissible triggers. The Lyme spirochete (a bacteria) can be isolated, grown, cultured, and transmitted. It’s a true dises-causing agent. Non-infectious health challenges like most kidney, liver and hormone dis-eases are not like this.

You may know that dogs are much more likely to develop Lyme disease than cats. Even though some outside cats pick up loads of ticks. Why might that be? Well, cats are generally vaccinated and suppressed less than dogs. They seem to have a more robust immune system and natural resistance to Lyme.

Research studies have shown that vaccination is related to (and can cause) immune dys-function. A strong immune system is the best protector against Lyme and other infections.

The Truth About the Lyme “Epidemic”

The epidemic of Lyme positive animals started around the same time that the in-clinic test for Lyme became popular. A screening test for Lyme started to be included along with routine heartworm testing. In some (“endemic”) areas over 90 percent of all dogs were coming up positive on this test.

Almost all Lyme tests only show antibody production. Not Lyme infection. A positive test shows exposure to the ticks that carry Lyme. That’s it. The test is great for proving exposure from but it doesn’t translate into there being an infection.

These Lyme tests are very similar to the familiar Parvo and Distemper titers. They help you decide if your pet is protected from these infections. A positive titer is good. It shows that the immune system is doing its’ job (making antibodies).

But a positive Lyme titer we’re not so happy about. Why? Because we are told that this means disease and the need for anti-biotics. Not true. Just like a positive Parvo titer does not mean that immediate Parvo treatment is needed.

The main difference between Lyme and other titers is that the Lyme titer antibodies are not protective. A positive titer does not translate to protection (unfortunately).

However, when interpreted using the Context and Interpretation method, Lyme titers and other diagnostic testing is useful. It helps make up part of the whole and facilitates good holistic medical decisions. So do the test, but don’t treat based only on the test results. Is your pet showing symptoms of Lyme disease (context!)? Maybe all s/he needs is following up with a more accurate test.

Lyme Testing and The Best (and Worst) Lyme Tests

Few tests actually look for Lyme organisms. Even when one does, the bacteria are rarely found. They hide.

Most tests are only for the antibodies against Lyme. These show an immune response. The most common, “SNAP”, tests are often run in the vet hospital. But these are subjective qualitative tests. Not quantitative (where the result is a definite number). SNAP tests are therefore not as helpful. They are useful for screening but not for deciding whether to treat an asymptomatic positive pup.

If the subjective screening test is positive you should get more definitive information. You need the number. It reflects the number of antibodies. You can currently (2017) do this two ways. There’s one test that gives just one number. That is the Idexx C6 test. Even better is the newer Cornell University Multiplex which reveals multiple numbers.

The Cornell Multiplex is especially useful for monitoring. The multiple immune parameters it measures can better help guide your treatment decisions. But like any test, it needs to be interpreted in context (test result + clinical scenario = context).

In addition to natural exposure, vaccination is the other way to get a positive titer test.
This artificial immune stimulation may or may not be effective. Like the flu shot. Either way, it is scientifically known that vaccination can damage the immune system.

This lack of effectiveness along with the known immune damage from every vaccine, makes vaccination for Lyme less than desirable.

Even the veterinary Lyme specialist Dr. Meryl Littman of the University of Pennsylvania says about Lyme vaccination (when talking about Lyme nephritis and kidney failure in Golden Retrievers and Labradors): “These patients are most likely the very ones we should NOT vaccinate lest we add more complexes or sensitize them for a more intense immune-mediated reaction when they are boostered or exposed naturally.”

Dr. Littman is saying that even though these pups are those most likely to get Lyme-associated kidney failure, we still should not vaccinate them. It’s dangerous.

She says, rather than risk immune damage from vaccinating, focus on promoting vigorous vitality. Vital dogs are less likely to contract Lyme disease.

We therefore see that:

If you want access to a full course on how to prevent and treat Lyme, buy it here or join Premium or All-Access memberships.