How to Optimize Your Pet’s Quality of Life Using BEAM

These four qualities will guide you in assessing your pet’s overall health. It’s a simple yet sensitive way to monitor your pet’s current state of balance, as well as to promote longer-term health.

BEAM provides the context for individual symptoms so you can accurately assess what, if anything, needs to be done. 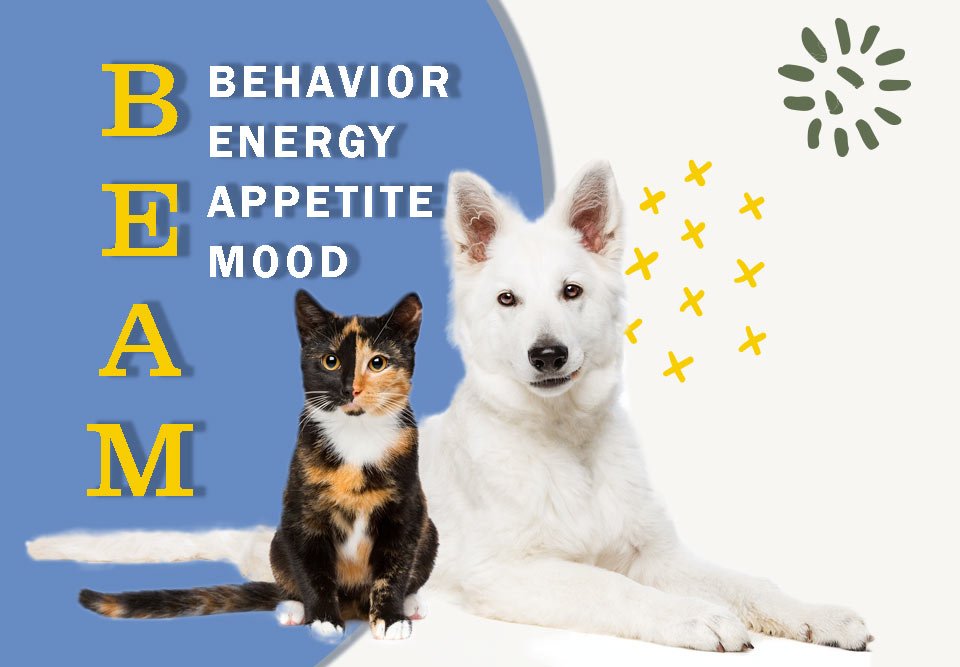 Fundamentally, life comes down to energy.

Energy, or power, is the difference between life and death. The “fuel” that cells use for all of their millions of functions comes from a molecule called ATP (adenosine triphosphate).  The cellular “machines” that makes ATP are organelles (little organs) called mitochondria. When oxygen is used in the process, it’s called aerobic metabolism; but even without oxygen, cells can still produce energy -though less efficiently – through an aerobic process.

Young animals have plenty of energy (seen as their vitality) needed to power all life processes. Their cells are fresh, vibrant, and easily capable of supplying all the energy a growing animal needs. But over time, energy production becomes less efficient, and the body’s ability to keep up with energy demands wanes.

Fundamentally, life comes down to energy.

Elderly pets and people who die in their sleep for no obvious cause are said to have passed away from “natural causes.” In other words, the body no longer had the energy to run, much like a car that ran out of gas or a computer with a dead battery.

As our pets age, slowing metabolism results in diminished immune resilience, reduced healing ability, and less ability to work optimally. When we observe our pets moving more slowly or being less enthusiastic at mealtime, we say that our beloved companions are just “getting older.” But the good news is that while aging is inevitable, how our pets age can be greatly influenced by our actions.

“The flow of energy is the determining factor between life and death.”

The paper starts with an overview for the context of stress, energy, and mitochondrial function. The authors go on to quote the founder of the healing framework called homeopathy. This scientific healing system can be integrated into and enhance the effects of modern medicine. Homeopathy helps describe how living beings get sick, and how to help them recover using their own natural ability to achieve inner balance:

This conventional research article had to reach back almost two hundred years for the quote, because the concepts of non-physical energy and the “vital force” Hahnemann was talking about are not part of the modern, scientific medical model.

So, what do vitality and energy have to do with BEAM? Everything! The vital energy of the biological system is reflected by the pet’s BEAM.

Fortunately, pet parents can see BEAM and vitality changes much sooner than tests can measure because they know their pets best. Every day they see things like jumping up to greet them when they come home, being interactive, enjoying their food, playing, etc.

How To Use BEAM

Here are a few ways that BEAM can be used:

As a reminder, BEAM stands for Behavior, Energy, Appetite, and Mood.

If a specific symptom that is being treated hasn’t changed, but overall BEAM is improving, this is a clue that the treatment is indeed helping. Skin symptoms, for instance, may persist for a time, because the body’s first priority may be healing a more serious internal – yet invisible – issue.

Whenever a treatment results in the reduction or elimination of an individual symptom, like loose stool or a red ear, but BEAM is declining, your pet may not truly be getting healthier. A new treatment or a completely different approach may be needed.

ALL aspects of BEAM, not just particular symptoms, will improve from any holistic action that’s helping the body heal. Even older pets can maintain high BEAM scores throughout their lives, despite some inconvenient symptoms. 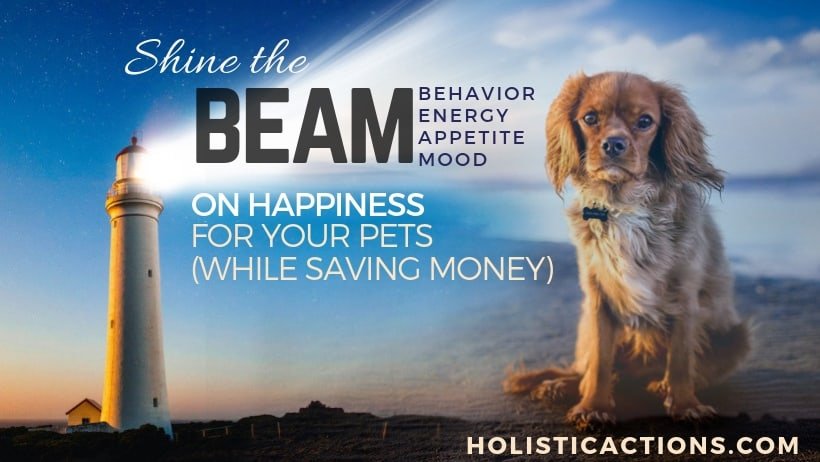 Every sign and symptom reflects how well the cells that make up your pet’s body are working. Maintaining physical function requires cellular energy, which is the fuel – like gas in a car – that helps all living organisms survive and thrive.

BEAM can help you “keep the tank full“ so your pet can remain vital and balanced.

You can assess your pet’s BEAM score every day, or even every few hours in an acute situation. It is a measurable method that you can use at home for early detection of dis-ease (imbalance).

BEAM can help you decide to act based on subtle fluctuations in vitality. Tests like bloodwork, radiographs (x-rays), and urinalysis only measure gross (obvious) changes. However, you can assess BEAM at home at any time, without any special equipment.

This is so important because science is showing that subtle energy influences, like EMFs (electromagnetic fields) and the biofield (the energy field surrounding the body), can cause internal energetic imbalances that manifest as subtle symptoms.

Scoring BEAM between 0 and 10 can be extremely useful to assess and monitor your pets’ level of health, as well as their healing ability. Experience shows that the better the BEAM, the better resistance to disease and the faster the healing.

Everything your pet does is reflected in their BEAM – you compare the fluctuations to your pet’s normal, their usual state. For example, whether your pet gets up to greet you, how often and how loudly your cat purrs, length and depth of sleep, how quickly they wake up and get going, how well they eat, etc., provide valuable clues.

How to evaluate BEAM

APPETITE: Excitement before eating, speed of eating, and percentage of food finished in a meal, can be measured. Appetite is usually the easiest part of BEAM to quantitate.

BEHAVIOR: Behavior is also pretty easy to see and assess. Whether a normally independent, sociable pet is hiding, clinging, trembling, growling, or snapping is readily seen.

ENERGY: Energy is the next most measurable aspect, and manifests in many ways. These would include things like stamina on a walk, the number of times a dog can fetch, or how long a kitty plays with an interactive toy.

MOOD: Mood is the most difficult part of BEAM to measure. Since animals can’t verbally express their moods, our interpretation is necessarily subjective. I wish I could ask my dog Archie if he is panting because he’s hot, or because he’s anxious.

Trends in BEAM over time, or even just one small change in one aspect, affect the overall BEAM score, and are an important part of your pet’s health journal. 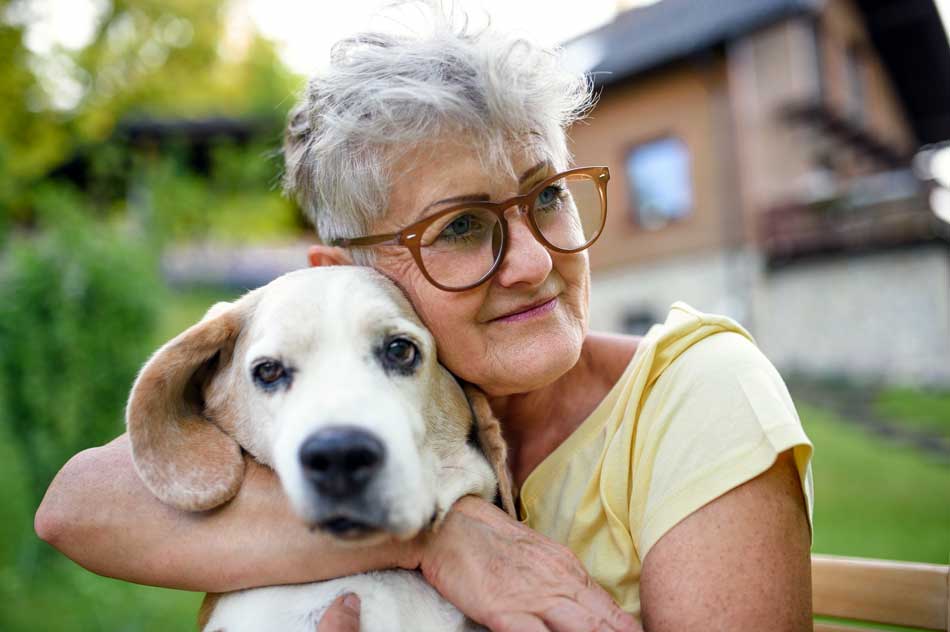 Sue only knew that her dog Raine had “something going on” because of a small decrease in her appetite. This one change in one aspect of BEAM was enough change to prompt Sue to take Raine to the vet, even though the rest of Raine’s BEAM was normal. Blood and urine tests showed early kidney dis-ease due to Lyme bacteria. Caught early like this, Lyme disease is far easier to manage.

Pet parents like Sue observe BEAM in many ways – it’s a subjective interpretation, rather than objective measurement.

The subtle change in appetite that allowed Sue to pick up on Raine’s Lyme kidney disease was a decrease in her urgency to eat, which Sue calls her “hurry up” excited barking. Normally, Raine did this while Sue prepared her meals.

Sammy’s inflamed red ear was not bothering her much, and she was otherwise normal. Ralph had a very similar-looking red ear, but he was also moving slower and was less enthusiastic in interactions with the family.

Even though both dogs had the same visible symptom, assessment of BEAM helped  Ralph’s mom decide to get him into the veterinarian immediately where the vet found anemia. Sammy’s guardian scheduled the next available appointment a couple of weeks later. She decided to try using aloe vera on the ear. The redness resolved in a few days, and Sammy’s BEAM returned to 10/10. She then felt comfortable about canceling the vet appointment.

BEAM Works for People, Too! Personally, I’ve had “mystery” symptoms since I was 14. The physical dis-ease remained undiagnosed for over 40 years. But by following strategies based on improving BEAM, my symptoms, function, and quality of life are better today than they were 10 years ago!

As you can see, BEAM is a modern way to keep an eye on overall health, to monitor the strength and balance of the vital force, and to assess the healing process.

BEAM provides a context for your pet’s symptoms, and can be used as a daily marker measure of pets’ vitality and well-being. Many aging pets with symptoms from decreasing energy and vitality have been rejuvenated by pet parents focusing on BEAM rather than individual symptoms.

Companion animal guardians all over the world are shining the BEAM on the goal of maintaining great cellular energy, vitality, health, and happiness, even as their pets age. BEAM provides a bright light for helping us find the best way forward.

P.S. One fun (and effective) application of BEAM during an energy-building therapeutic sniff walk, is to BEAM (you know, when people notice that your face is beaming – try replicating that) while your pup or kitty checks the neighborhood “pee mail” by sniffing.

P.P.S. Here are some BEAMing sessions:

In this video Archie is increasing his BEAM by jumping for joy before meals. And in this video the pure expression of joy is infectious and good for her health!