Confused About Your Pet’s Symptoms, and Maybe Even Your Own? Gain Clarity With a Big Picture Perspective

Why our pets, or ourselves, for that matter, develop health problems can be a trickier question than it might appear. Say, for example, you take your puppy to the vet because you’re seeing symptoms that concern you. (And while we’re at it, let’s imagine that you take yourself to your doctor for the same reason.)

“But what caused it?” you ask, to which the vet responds, “The parvo virus,” and to which your doctor responds, “Strep bacteria.”

On your way home from the vet and doctor, you find yourself thinking, “The answers I was just given don’t make much sense to me. For one thing, my puppy’s litter mates were in the same kennel, exposed to the same virus, and none of them got sick. And as for strep, why has nobody else in my busy office gotten sick when I’ve been feeling awful for more than a week now?”

These are very, very good questions. Unfortunately, the answers that most people are used to receiving from both their vets and their physicians are purely circular. This is to say they essentially answer a question in a way that simply begs another question rather than shedding light on it. 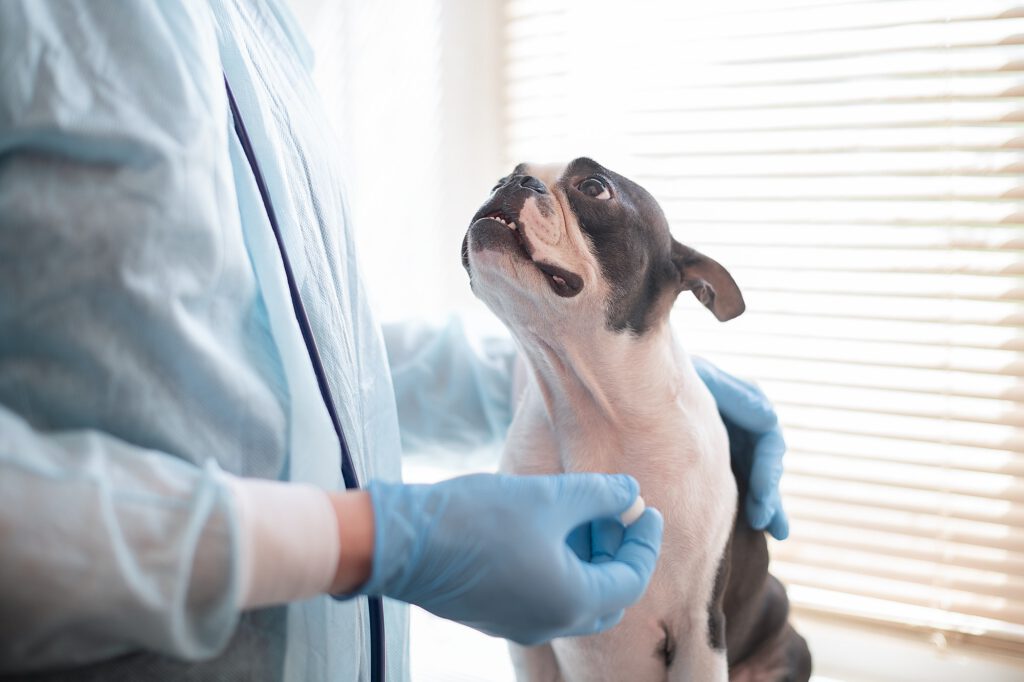 The Confusion that is Created by an Incomplete Picture

Have you ever heard the parable of the Blind Men and the Elephant. In it, five blind men each explore an elephant by touch. Depending on which part of the elephant they touch, they each believe that they are dealing with something entirely different: a snake, a rope, a spear, and so forth. They lack the vision to see the whole picture, and this leads them to draw false conclusions that, like the circular answers we just discussed, shed no light on the matter.

When your vet or physician tells you that an infectious agent (a germ, a bacteria, a virus, or even a gene) “caused” a particular illness or dis-ease, they’re working from a model that makes it very difficult to see the bigger picture. Without the bigger picture, you can’t gain an accurate understanding of the nature of the illness or dis-ease you are trying to address.

The term “causation” is misguiding. Living systems (like you and your pet) are what are known as non-linear, complex systems, or even more accurately, self-organizing systems. This means two things. First, everything that happens inside your body or your pet’s body is complex, which means that illness or dis-ease is not caused by a single isolated variable, or even a string of them. (That’s the non-linear/complex systems part.) Second, it means that your pet’s body, your body, and any living organism has an innate power to heal itself if adequate conditions can be created for supporting this process. (That’s the self-organizing part.)

If we are to speak of “causes” of health and dis-ease in any meaningful way that engenders clarity rather than confusion, we need a better way of seeing the bigger picture — of looking at health and dis-ease in context. By taking a look at the whole “elephant” and not just its parts, holistic perspectives and approaches can help us see the bigger picture and more fruitfully find our way forward.

The wonderful thing about holistic perspectives and approaches is that they transcend other approaches while including the best parts of them. In fact, one of the most effective ways to judge any approach across any discipline is whether it does a good job of respecting and reconciling the partial truths found in opposing views. Let’s take a look at how a holistic perspective looks when applied to Germ Theory.

You’ve probably heard of Louis Pasteur, the father of modern Germ Theory. According to this theory, certain illnesses or diseases are caused when the body is invaded by pathogens (“germs”).

But there’s another theory — a theory that may have been too ahead of its time to be adopted by the masses. This theory is called Terrain Theory (TT). According to TT, the internal system of an animal or person can be likened to a garden (or, more accurately, to an ecosystem). For pathogens to take root and breed illness or dis-ease, an ecosystem must be thrown out of balance to the point where it can no longer effectively defend itself.

The trouble with Pasteur’s theory is that it is too partial for making sense of why some pets and some people become ill when exposed to pathogens while others don’t. But when we add Terrain Theory to Germ Theory, a bigger picture emerges that confirms what may be research science’s most important maxim: correlation is not causation.

While this core maxim is not unknown to most vets and physicians, in actual practice, it is routinely ignored. This is unfortunate because if followed through to its logical conclusion, it can offer crucial insight for making critical distinctions that bear directly on treatment methods and modalities. It also helps us recognize why the answers we receive about causation often feel so unsatisfying and confusing.

While we may accurately say that a particular pathogen correlates with a particular illness, there is no logically sound reason to say that this pathogen causes it. Saying that a pathogen or pathogens cause a disease is like saying that the parts of an elephant cause the elephant, or that baseball players cause baseball games, or that children cause a family. Intuitively, this makes no sense, but when it comes to how we think about health, we’re so used to having correlation confused with causation that we rarely register the disconnect.

Seun Ayoade, a preeminent holistic thinker working from a hybrid model of Germ Theory and Terrain Theory, aptly points out the most complete and accurate predictor of dis-ease lies in investigating the relationship between multiple variables. The severity of an infection, he explains, depends on both the virulence of a pathogen and the condition of the complex inner terrain.

Said differently, It is in the interplay between complex variables —- the current condition of the inner terrain, germs, genes, diet, activity levels, social connections, emotional well-being, and forth — that we can find greater clarity for getting to the bottom of what’s ailing us and our pets and taking effective holistic action.

Leaving You and Your Pet Better Off Than Before

The beauty of holistic actions is that they are designed to leave you and your pet better off than before you became ill or experienced dis-ease. This is because a holistic approach aims not merely at eliminating symptoms, but at promoting vibrant health by restoring inner balance and increasing vitality.

A holistic approach never says, “Let’s give your dog an antibiotic or two (or three) to get rid of that nasty pathogen, and never mind about her lack of exercise, poor diet, and the fact that she’s not getting enough social interaction. And oh, also don’t worry about the way that anti-biotic use will further compromise her body’s ability to protect itself from pathogens.”

A holistic approach says, “Let’s look at what your dog’s allergy symptoms may be trying to tell us about deeper issues that are going on in her system. Let’s look at her diet, her activity levels, her social interaction, and her sense of safety. Let’s see what other clues we might be missing by taking a thorough inventory of potential symptoms that are so subtle we may be missing them.

Let’s introduce pro-biotics to her diet and begin fresh feeding to help rebuild her system so she’s better able to defend against pathogens and more resistant to dis-ease. Since this isn’t an acute or urgent issue, let’s take our time to deeply understand what’s going on and to address it gently yet thoroughly before electing to use aggressive approaches like drugs or surgery. Let’s aim for inner balance and greater vitality and optimal health to give her the life she deserves.”

Which approach do you prefer?

Pet parents and holistic veterinarians around the globe are already using our holistic perspective and approach to nurture optimal health for their companion animals. If you’re a pet parent, you can confidently take easy holistic actions to increase your pet’s inner balance, protect them from pathogens, and enhance their quality of life. These free, simple and 100% safe lifestyle tweaks can be easily implemented through The Terrain Optimizing Protocol. 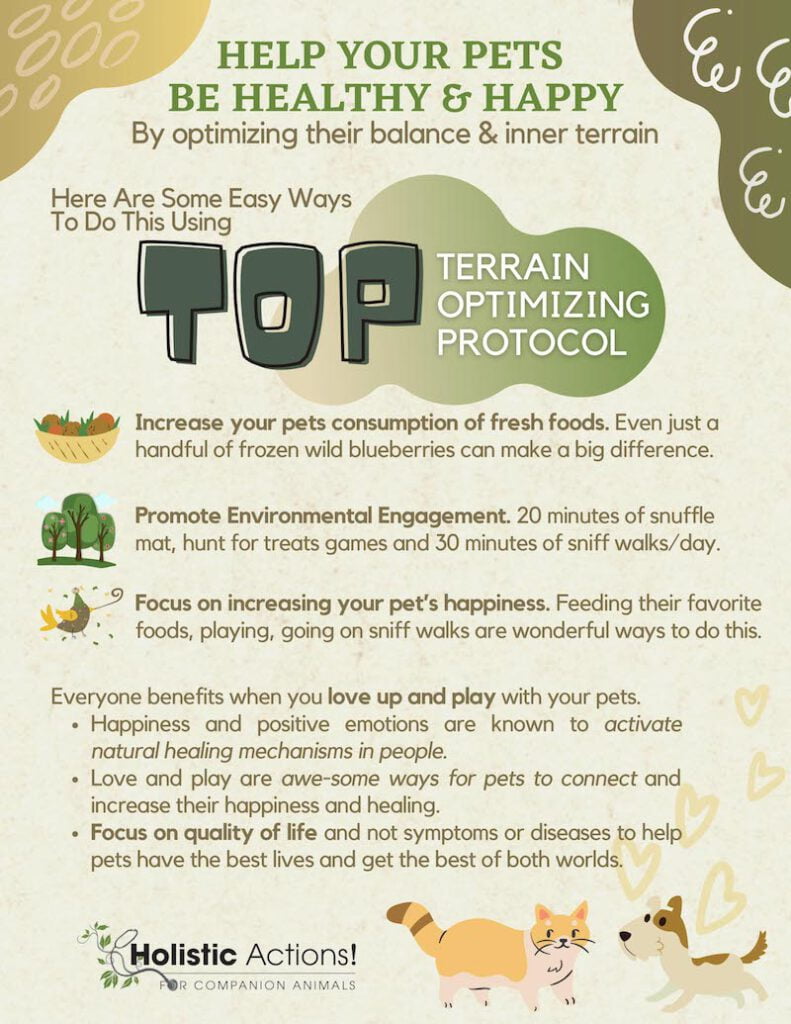 You’ll love the way it supports and fuels the natural healing ability of your pet’s body.

Holistic Actions! helps you get a big picture view of your pet’s symptoms to gain greater clarity about how to nurture optimal health.

Thank you for visiting us here at Holistic Actions! We wish you the best of luck on your holistic journey!