Discovery of Vitality, Balance and Homeopathy 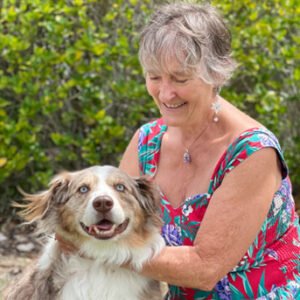 Graduating from the University of Georgia College of Veterinary Medicine in 1980 at age 30, I was not thinking at all holistically. I had done a two-day animal acupuncture class with the original U.S. founders of IVAS (International Veterinary Acupuncture Society), Dr. Grady Young and Dr. Marvin Cain. I then did a little research my senior year using acupuncture points for glaucoma that didn’t work so I was not interested in anything holistic.

Listen to the latest interview with Dr. Christina Chambreau on her veterinary journey.

A year or so after I graduated from veterinary school, I was working at a small satellite clinic in southern Maryland, when a client came in and asked me to draw blood and send the results to her homeopathic veterinarian. I said, “Sure,” and did it—drew the blood—then said, “Hey, what is homeopathy?” She introduced me to it, and I called the local veterinarian, who had taken the very first class offered by British homeopathic veterinarian George McLeod for the National Center for Homeopathy. He sent me two bottles of these little white globules, saying that these homeopathic medicines were good for cats with bladder problems. I put them away on a shelf in the main clinic.

At that time, I didn’t know that homeopathic prescriptions are not made for specific diseases like UTI. Homeopathy is based on the principle that “like cures like” and the selection of the medicine needs to match all the symptoms of the entire animal, current and past.

A few months later, my boss was seeing a cat who had been on antibiotics continuously for three years for a bladder problem. Any time they tried to stop the antibiotics, the straining and blood immediately returned, and they were now starting to look at euthanasia because of some side effects from the drugs. I said, “Hey boss, I’ve got this homeopathic stuff Dr. Tayman sent. You want to try it?”

He said, “Sure. You ask the cat’s owner.” Well, I was fairly timid, and I went in and I said, “Hi. I heard that your cat is not responding to these drugs for the cystitis. There’s this homeopathic medicine that can help.” She said, “Well, I’ll try anything. Tell me more about it.” “Well, I don’t know anything more about it,” but I did explain that a veterinarian in another city had sent it to me and the upshot was that one week of giving the homeopathic medicine probably twice a day—because I was very conventional back then—and the cat was off the antibiotics completely for the next nine months that I was at the practice and had no urinary tract problems.

I was very intrigued by this result and the information my client had shared about her success in her psychotherapy practice using homeopathic medicine. The next two summers I took the NCH summer school weekends with Dr. McLeod, bought some books and began using homeopathic medicines at my next clinic. Owner Ann Lehman was open to anything that would help animals.  A few memorable early cases included the following.

A middle-aged Dachshund had severe spondylosis – on the radiograph it looked as if there was a second row of vertebrae below the real vertebral column, extending for 8 vertebrae. The dog could not bend sideways. He had been started on several homeopathic medicines by Dr. Khalsa in Pennsylvania which I continued. After 3 months of treatment, his radiographs showed 100% resolution of the spondylosis and he was as limber as a puppy.

A cat with megacolon had to have enemas every few weeks and no drugs were helping. Four doses of a homeopathic medicine and she was defecating on her own.

A wonderful woman rescued a schnauzer tied in the back yard in a Las Vegas home 8 years before I saw him. At age 5 he developed an odd behavior that began to increase in frequency, now happening weekly or more. Classmates of mine I respected had done every possible test and had no diagnosis and nothing that could help Muffin. He would waken between 11 PM and 4 AM, going under the bed and howling. Sometimes they could pull him out and cuddle him back to sleep. Other times he urinated all over them. Other times they put him outside and he would bark and howl and run around the yard. The entire episode could last 5 – 30 minutes. With homeopathic treatment and general holistic changes like a fresh food diet, the episodes completely resolved for the rest of his life (he lived to 19).

That was the beginning. A local pediatrician was in my second weekend, knowing she would learn how to treat infants better by how animals, who also cannot tell you their symptoms, are treated. Because she did not require her patients to avoid coffee during homeopathic treatment as many homeopaths did, I decided to try homeopathic treatment for a year-long fungal infection that had not responded to my medical self-treatment. A famous Belgian homeopath was visiting her and they both took my case and prescribed one dose of a homeopathic medicine – and the Belgian told me no caffeine for three months!! My fungal infection cleared, and more dramatically, I had a profound shift in my psyche, leading to being married in June the next year to Morton Orman. We are still happily married over 30 years.

One dose of a homeopathic medicine certainly dramatically improved my life.

After taking the two weekend classes, I enrolled in the year-long New England School of Homeopathy’s year-long training program taught by Paul Herscu. By then, Dr. Pitcairn was offering annual weekend classes on homeopathy for animals and I went to every one, offering homeopathy more and more often for my patients. In 1986 I made an arrangement with the conventional veterinary clinic to see only homeopathic patients there and not see their regular patients. I also began working for the founder of the American Holistic Veterinary Medical Association in his clinic, learning even more about the holistic paradigm. I began teaching classes on holistic health and homeopathy. By 1988 I was doing mostly telephone consulting for people who wanted homeopathy and had no trained veterinarian near them. Speaking, teaching and writing filled the next two decades. And I continued to see the effect of homeopathic medicines on myself.

A homeopathic medicine began a process of healing a liver damage from anesthetics after an accident. Experiencing the deep healing process helped me empathize with my patient’s journey to health.

Then I broke my ankle when I was in Costa Rica, and homeopathic internal and topical medicines kept me relatively mobile. My husband did have to do all the driving! The radiograph I took at my local veterinary clinic when I got home showed a severe spiral fracture. The Orthopedic surgeon said “Since you have been walking on the ankle for 10 days you only need a removable boot and not the surgery I normally would recommend.” I could even take showers! Once the ankle was stabilized, all the pain and bruising resolved in 24 hours. I had none of the problems he predicted and in the 20 some years since then have had no problems with that ankle. Thanks again to homeopathy.

In my sixties now, homeopathy and holistic approaches have kept me healthy enough to be on no conventional drugs at all.

I started speaking in 1991, first for 150 people for a PETA (People for the Ethical Treatment of Animals) seminar about homeopathy. Over the next two decades I spoke at hundreds of venues. I was speaking everywhere I could about homeopathy and holistic medicine in general. From 1990 through 2003 I was on the faculty of the National Center for Homeopathy’s Summer School until it was discontinued. The wonderful head of the Maryland Veterinary Technician Program, Jack Stewart, hired me as a holistic modality adjunct faculty liaison and instructor beginning in 2004, lasting 10 years. Also starting in 2004 I taught as part of the Prince George’s Feral Friends summer school, teaching Introductory, Intermediate and Advanced homeopathy classes over the next 8 years. In 1995 I was able to speak at my 15th reunion at the University of Georgia.

I continue to teach courses around the country to lay and veterinary students. My commitment is to de-mystify homeopathy, to show how healing of all types follows the principles of the Organon and to have people realize the power (for good and bad) of remedies. I continue to write for any media, be on radio, TV, the internet and speak anywhere – from veterinary conferences to the neighborhood pet store. Empowering animal guardians to be their pet’s best advocate is now much more possible since joining the faculty of the Holistic Actions Academy in 2016. I am also the author of Healthy Animal’s Journal, Fleas Be Gone, and more.

Questions – the secret to cure

Over the decades of teaching and using homeopathy, what’s most important to me is that people ask questions. A major problem is that people aren’t asking their own veterinarians questions. This is one of the ways the Holistic Actions Academy empowers people in weekly webinars where they can ask questions and be reminded to pause and think about what treatments are being suggested by anyone.

For example, if a conventional vet tells a pet owner to give heartworm prevention once a month, the pet owner agrees to do so, then asks her in a class or appointment if they should really do it. I often respond, “Well, do you know how your dog gets heartworms? Do you know how the “preventative” works?”  Many people have no idea and so cannot make a good decision for themselves.

Clients aren’t asking their veterinarians “What if” questions. When a veterinarian recommends an MRI because a pet isn’t walking very well, there are many possible questions before doing this expensive test, or treatments that may have a risk. How would the MRI results (or any other test) change the treatment protocol? Are there are any alternatives to the MRI? Can we try some other treatments first and do the MRI later?

I want to say how blessed I am to be in a profession that helps people and animals be healthy and happy. You, my clients and students, are so passionate about the health of your companions that I am constantly inspired. I am passionate about living and supporting people and their animals. I want to let everyone know now about the holistic paradigm and all the healing options that are available.