This post is about the topic for our Monday 9/9/19 Empower Hour! webinar (which is archived in your member area if you missed it).

It's about understanding your pets as much as training as this will help prevent and treat behavior challenges.

Here it is if you'd like to read it:

dog training thoughts from a non-trainer

Hi again everyone- Here are some of my recent thoughts after having worked with Archie (rescued 7/1/18) for ~6 months. As many of you know, we are his fourth home and he understandably has some deep issues. Most notably Fear Happiness. The more he gets scared (up to his threshold where he...

We are discussing this important topic as part of our rescue, shelter and training series because problematic behaviors are among the top reason why pets are given up to a shelter.

The top issues are inappropriate elimination for cats (peeing or pooping outside the litter box) and "aggression" for dogs.

Here's the beginning of the conclusion of a detailed article about re-homing:

This study aimed to increase the available information relevant to the re-homing of dogs and cats in the US. Specifically, we aimed to learn about the demographics of the people and the pets they re-homed, their reasons for re-homing, and the ways in which they re-homed...
Click to expand...

If you'd like to read the full article, it's also in your HMDM research folder:

The article is not specifically about having a great relationship with your pet, but having one definitely decreases behavior challenges and re-homing. 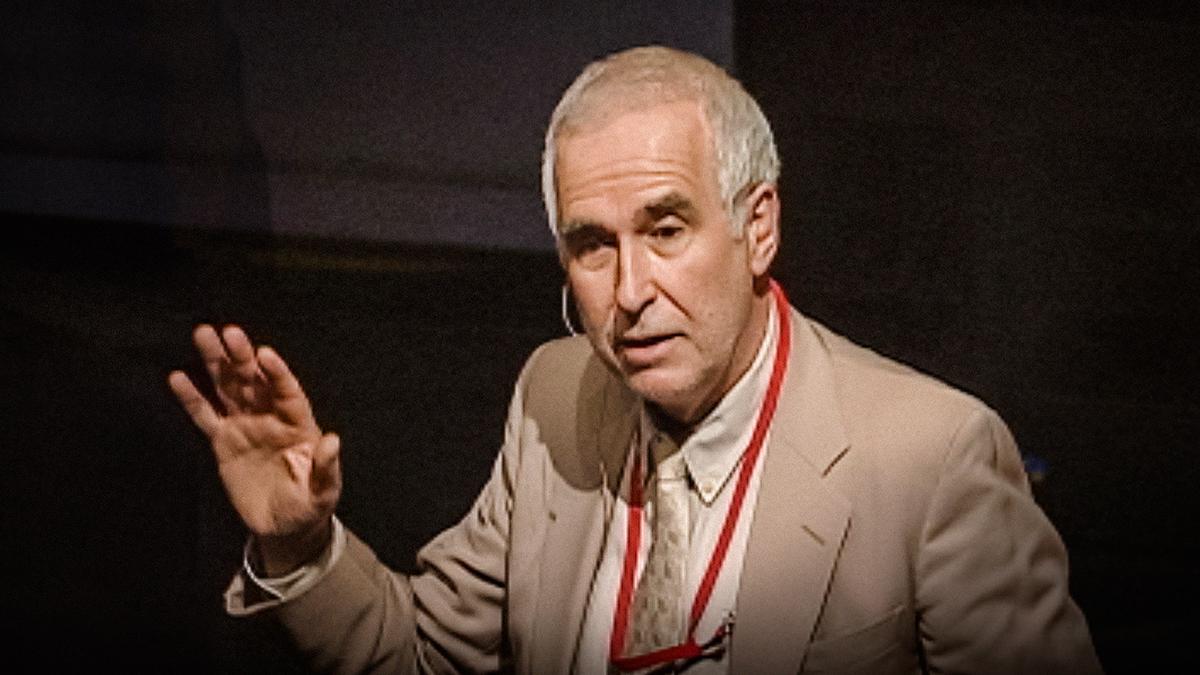 Speaking at the 2007 EG conference, trainer Ian Dunbar asks us to see the world through the eyes of our beloved dogs. By knowing our pets' perspective, we can build their love and trust. It's a message that resonates well beyond the animal world.

Ian discusses some of the important aspects of having a great relationship with your dog throughout the talk (which is similar, though not the same as for cats).

However, awe-some trainer Suzanne Clothier has summarized relationship-based training nicely in this article from your research folder (it's listed under "training"): 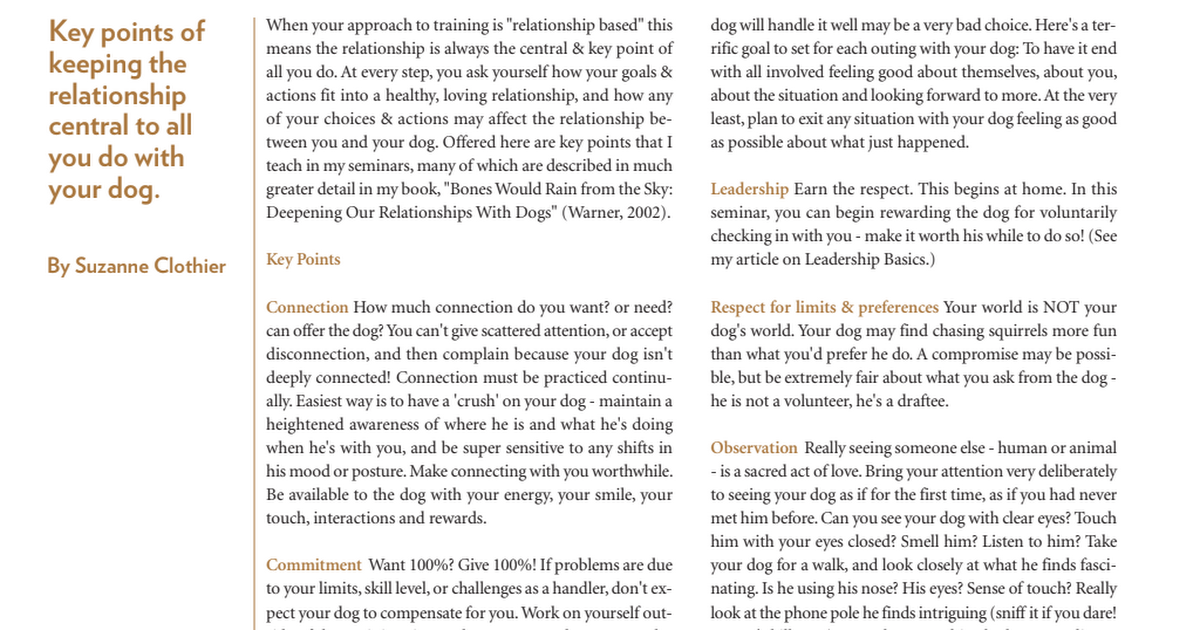 On Monday, relationship-based trainer John Jones will be joining us to discuss this great topic and answer your questions.

John is currently located in PA but can consult with pet parents throughout the world by Skype.

I look forward to hearing your experiences (post them below) and talking with you on Monday.

HA!'s own trainer in residence (of 3 species!), Jen Bridwell, also has words of wisdom to share.

Jen will also be joining us for the Empower Hour! (so watch out for flying witty repartee between Jen, John, Dr. Christina and I.

Here's what she wrote (several years ago):

How Owners "Love" A Dog Into Aggression or Behavior Problems

If dog guardians consistently act in a manner that from the 'dogs point of view' appears to show subservience, submission, fear or subordinance, then over time, the dog will begin to think that he is in fact superior to you.

Some of the social interactions that the majority of dogs will perceive as subservient or submissive are:


Dogs don't do democracy, you either serve or are served.

If you are Alpha, from a dog's point of view, then you have (3) three rights and responsibilities:

The right to get what you want, when you want it, from whoever has it.
The right to prevent others from doing things that you don't like.
The responsibility to maintain peace and harmony, from the Alpha's point of view, by keeping the "lower members" of the pack in line.

REMEMBER IF YOU TREAT YOUR DOG LIKE A PERSON, HE HAS THE RIGHT TO TREAT YOU LIKE A DOG.

Between social animals, rules are important since there is a real need for predictability in the behavior of others around us. It is surprising, hurtful and sometimes genuinely frightening when others don't act or respond to us according to established "rules."

In dog to dog interactions - just like in our daily lives - certain basic rules are established and rarely, if ever, change although variations on the basic theme may occur.

Conflict arises only when the shift in the rules is not equally agreeable to both parties. There is a need to be able to predict the consequences of our own behavior, which helps us to avoid confrontation or be successful - both are hard to do if basic rules keep changing.

Imagine that each time you drove down the street, the powers-that-be had established new rules for driving!   There are some variations in "rules" and temporary rules that are purely dependent on a specific situation or a given dog's mood or the perceived value of the resource in question.

Dogs check with each other often to see what the rules of that moment are: "Will you play with me now?" "Now can I share your bone?" They check with their human companions in the same way and for the same reason - they want something and are testing various avenues of getting it.

In the dog’s mind, it never hurts to try.  In many little ways, we teach our dogs that we are not worthy of respect. When we indulgently allow them to act in inappropriate ways - even small ones - we often forget that we are providing our dogs with the proof that we are not good leaders.

That is how they perceive lenience, inconsistency and indulgence.   They don't think, "Ah, what a sweet guardian I have. She must really love me." No more than you think that a boss who lets you come in late, leave early and take 4 hour coffee breaks is a swell guy. You think he's a wimpy jerk, and you don't respect him, though you may like him a lot!

The dog thinks, "Aha! Resources I value such as attention, food and toys are but a request away, and they're free!" In the world of dogs, he who controls the resources is to be respected.

From your dog's point of view, if he can control the resources, he must be the boss. Quite often, dogs don't mind, since in non-crisis situations, indulgence often results in extra treats or attention or playtime.

Depending on the dog's individual personality, poor leadership can be utterly harmless, creating at worst a pest who annoys all he meets. But it can become quite dangerous when the dog begins to change the rules and boundaries on more issues he considers important: people entering or leaving the house, being disturbed while resting, eating or sleeping, being handled or restrained, other animals in his territory, etc.

If the guardian does not have the dog's respect and has allowed the dog to exert leadership in small ways, there is NO way that dog will allow the guardian to set the rules for more important issues.

Consider this: You have a friend who is sweet and generous but incapable of deciding on what movie to see or even what flavor Jell-o to whip up for the picnic. She dithers and blathers but is completely unable to act decisively on even the simplest issues. One day, aliens attempt to take over your town. You and your friend attend the emergency neighborhood meeting held to decide how best to deal with the alien threat. Your lives are at stake - this threat must be handled correctly. There's a call for nominations of people capable of acting in leadership roles. Do you nominate your friend? Of course not. You vote for someone who has proven leadership abilities.  So do dogs.

Guardians who fail to set boundaries and provide clear leadership are often very surprised when in a "crisis" situation (which could be as simple as the mailman walking up the path or someone walking another dog) their dog completely disregards any commands and acts according to his perception of his role in the relationship. The dog may feel the need to include dramatic (and effective) gestures that are at best just frightening, and potentially quite dangerous.

Life is too short to hem and haw and not follow your heart, assuming following your heart doesn't mean riding roughshod over other inhabitants of the planet. As a general rule, it's not considered sporting to take candy from a baby. (It should be noted that dogs would probably ask the question, "Why not if they'll give it to you?").

But there is an advantage to modifying impulses, and learning to ask nicely, and seeking compromise with others - you are welcome in more places, and often ultimately have greater freedom. In allowing a dog to set the boundaries in many areas, the guardian inadvertently sets a far crueler boundary - one defined by his dog's rude behavior.

Any journey consists of many small steps. This is also true of our relationships with our dogs. In sundry and even tedious ways, each interaction with our dogs tells them something about our leadership qualities.

While we may flip in and out of different roles (employee, spouse, parent, dog guardian), there is no "Off Duty" sign on our heads that indicate to the dog that our actions are off the record, not the actions of a leader of dogs, and should be paid no mind.

The dog believes that just as he does, we say what we mean, and that there's a valid communication and intent to all we do with and for them - 24 hours a day. When we forget that one of our major obligations to our dogs is to provide them with the leadership they need, we may found ourselves on the wrong side of a line in the sand - one drawn by the dog.

Hey, the dog figures, if you can't decide on a Jell-o flavor, you probably can't be trusted with dealing with the mailman.
Click to expand...

Here's a good article which is a quick read from a rescue trying to save lives by preventing behavior problems:

These are excellent articles.
The basis of good communication and training is mutual understanding.
Many dog and cat owners do not understand what their animal is trying to tell them. People, in general, are pretty rubbish at understanding an animal's language, though we expect them to understand us!

A few communication books that I have found helpful are:
"How to Speak Dog" - Stanley Coren
"Decoding Your Dog" - Ed. by Debra Horwitz, et al
"Think Like a Cat" - Pam Johnson-Bennett

This behavioural text is quite useful and descriptive:
"Manual of Clinical Behavioral Medicine for Dogs and Cats" - Karen Overall
It is written from a conventional treatment perspective, with valuable basic behavioral information.

Enjoyed the past week's discussion on Relationship with Your Dog. I found this succinct article to be right on target and thought others might be interested in reading it. 11 Ways to Strengthen Your Bond With Your Dog

Thanks for participating in the discussion on Monday Maura.?

Great article (except for this part:

dumping the kibble in the bowl
Click to expand...

It's now in your HMDM research folder (indexed by "training).

Thanks for sharing it.